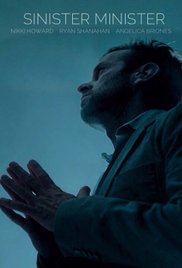 What better day to debut a movie about a deviant preacher than SUNDAY? Of course, the smart team at Lifetime knows how to rock a movie premiere, and that was evident during last night's first showing of "Sinister Minister."

This is one of those "based on a true story" movies, and it begins with a bang (literally). Reverend D.J. (expertly played by Ryan Patrick Shanahan) concludes a hot tub lovemaking session with one of his church parishioners, then declares he needs to get home to his wife. When he gets there, however, she apparently has "committed suicide."

Well, the good reverend marries his lover Betsey (Liz Fenning) and moves on rather quickly. Enter Trish (Nikki Alexis Howard), a divorcee in need of a fresh start. She brings her weed smoking daughter Siena (Anjelica Briones) along for the ride, which is quite bumpy to say the least. Trish's life is pretty much a trainwreck, and Siena doesn't help matters. So, they begin to attend Rev. D.J.'s church, which is a very bad move.

D.J. sets his eyes on Trish ... and eventually Siena. What does that mean for poor Betsey? Well, you can pretty much figure it out from there. Things seem to be going smoothly for the randy reverend until Trish's ex-husband John (Jeff Marchelletta) pops up to make things right. That means the Sinister Minister has to work overtime to get his way. Hot on his trail is supercop Detective Mann (Rachel G. Whittle).

This is a very good thriller with some awesome performances, particularly from the three leads. Shanahan is an excellent villain, flashing a smile while hiding his ulterior motives. Howard's performance as a woman at her wit's end is convincing, and Briones is the picture of a rebellious and impressionable teen.

"Sinister Minister" joins the ranks of other creature-preacher flicks on Lifetime and LMN - "Sins of the Preacher," "The Preacher's Mistress," etc. Still, this new entry into the Lifetime canon holds its own as an original, engaging and fun cautionary tale about faith, sex, and falling for wrong guy.

Posted by Lifetime Mike at 5:59 AM